A ‘Firelight’ For Every Dreamer: Jason Reynolds and 826 National present “For Every One”

“Dear future self, tell me that all the hard work, sleepless nights, and early mornings paid off. Tell me that all the suffering that I’m going through now has a good outcome.” —from “Dear Future Self” by Janeth C., Grade 9, 826LA

“Our dreams could be as far away as forever or as close as lunchtime.” —Jason Reynolds, For Every One

A first grader in Michigan writes about baking a cake with her mom. A third grader in Washington, D.C., imagines a candy-filled town called Sugarville. A tenth grader in Los Angeles ponders the fate of the planet. A twelfth grader in Chicago describes a place where everyone belongs.

Every day in 826 programs, young writers explore their dreams on the page. That’s why we’re thrilled to be partnering with New York Times best-selling author and National Ambassador for Young People’s Literature Jason Reynolds to launch For Every One on 826 Digital. The film, featuring Jason performing his powerful poem, premiered on 826 Day, August 26, marking a celebration of youth voices and the pursuit of dreams. It can be found here.

In the midst of a global pandemic, a remarkable push for racial justice, a polarized presidential campaign season, and at the start of a unique school year, For Every One feels particularly timely. Its exploration of freedom in creative life resonates with this moment of change we all find ourselves in. As Jason writes in the piece, “If you somehow find truth, comfort, or anything at all within this ramble, keep it close and use it for firelight for this long and often dark road.”

“For Every One, as a piece of writing, started as something personal,” says Jason. “It was like constructing a personal amusement park stocked with all the things that scare and excite me. A place for me to laugh and cry with no guarantee of a prize at the end.” Originally performed at the Kennedy Center for the unveiling of the Martin Luther King Jr. Memorial, and later as a tribute to Walter Dean Myers, this brilliant piece is a rallying cry to young dreamers. “Since writing it almost ten years ago, it’s become a prize in and of itself. The visual component is simply an extension of that. An offering to all the people in the middle of building their personal amusement parks right now.”

Jason worked with director Dan Buyanovsky and a team of creatives across disciplines in adapting For Every One to the screen. “Jason’s poem touches on so many of the hopes and insecurities creative people endure in their journeys,” says Dan. “Everyone who contributed connected with and wanted to amplify Jason’s message, and I hope it resonates with anyone at their own crossroads.”

Jason and Dan linked this message with 826’s work inspiring young writers, and our mission to make the power and the joy of writing accessible to every student in every classroom. On 8/26, you’ll find For Every One on a special page on 826 Digital, our online platform for educators. Alongside the offering of For Every One itself, Jason has provided “A Place Worth Being,” a writing Spark that prompts students to think of themselves as a place, turning their body and mind into an environment through writing. We’re encouraging educators and students everywhere to view For Every One and write in response to Jason’s Spark. 826 will be publishing select student pieces this winter in collaboration with Jason.

In For Every One, Jason writes: “Though the struggle is always made to sound admirable and poetic, the thumping uncertainty is still there.” As students in 826 work from the blank page through to a published piece, they know this uncertainty all too well. But great writers like Jason, and young people across the country, find reserves of courage. “Dreamer, if you’re like me, you jump anyway,” says Jason. We’re excited to jump in and write to Jason’s call to action on 826 Digital. 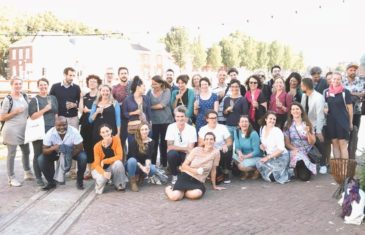 Word Up!: An International Conference

11 different countries, 16 different organizations; 147,000 children. From July 11 to 14, sixteen 826-inspired organizations gathered together to share knowledge and learn about the international landscape of writing, education, and youth voice. 826 National teamed up with Noordje, an organization that … Continue reading → 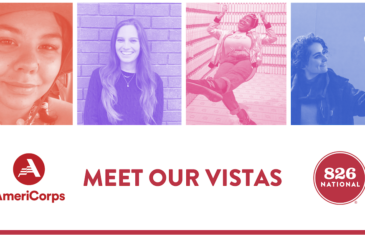 826 National is excited to welcome four (three new and one returning) AmeriCorps VISTA members to support our team in the 2020-21 school year. AmeriCorps members are passionate individuals who dedicate an entire year of service to a nonprofit organization … Continue reading → 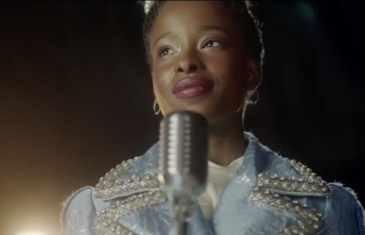 826 National CEO Laura Brief spoke with reporter Lena Pringle about Amanda Gorman’s  role in the Super Bowl and the importance of ensuring spaces for young people to write and thrive exist around the country.  ‘“She’s made the world a … Continue reading →