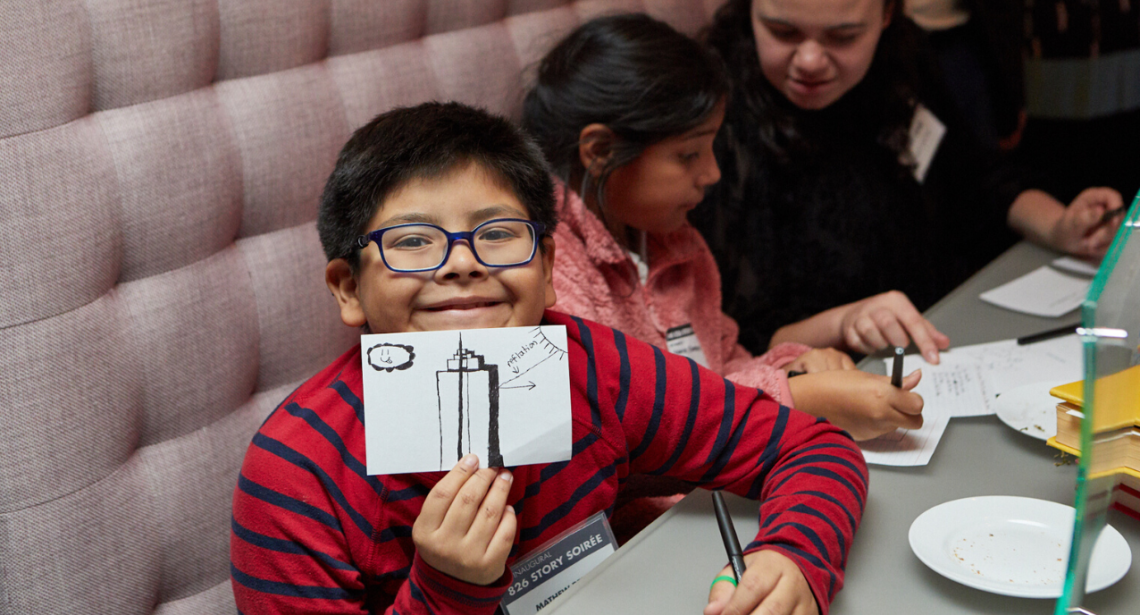 Celebrating the Power of Student Voice at the 826 Story Soirée

Celebrating a movement centered on creativity, democracy, and amplifying student voice through writing. That’s what happened on Nov. 7 in New York City at the inaugural 826 Story Soirée, an evening hosted by 826 National and 826NYC.

The event, held at 30 Hudson Yards, Warner Media’s stunning new event space and theater, celebrated 826NYC’s 15th anniversary and turned the spotlight on the power of the nearly 80,000 young authors across the entire 826 Network.

“826 thinks a lot about the question of who gets to learn to write in this country, and what impact that has on the personal, academic, and professional trajectories of lives, but also on our nation,” 826 National CEO Laura Brief told the nearly 300 attendees. “Whose voices are represented in our classrooms, in our newspapers, in our boardrooms? 826 firmly believes that all students should have this powerful tool. And we are working to make that happen.” 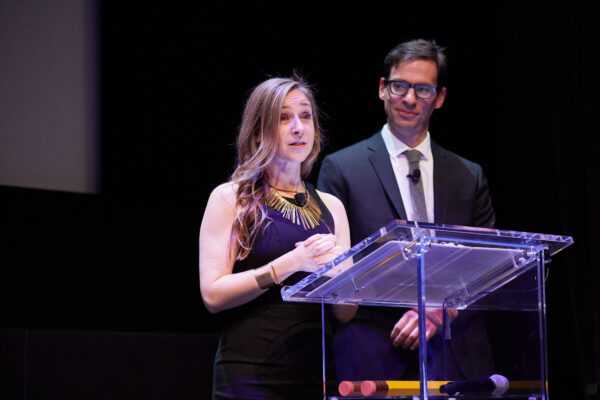 “As our students develop the tools to create vibrant new possibilities on the page, we see increased agency in their own lives: building confidence, curiosity, creativity, and self-expression,” added Joshua Mandelbaum, executive director of 826NYC.

Indeed, guests at the soirée saw the power of student voice in full effect throughout the evening. The reception gave attendees a taste of what it’s like to be at an 826 chapter through writing activities run by 826NYC students and several friends of 826, including Wyatt Cenac, Ira Glass, Maulik Pancholy, and Jon Scieszka.

During the program portion of the evening, attendees watched a video animated by Cartoon Network of a story by Nana-Wadieh, a 10-year-old student who’s been participating in programming at 826NYC for two years. His story was part of the 826 National Inclusion Storytelling Project — an effort to promote kindness, caring, and empathy among students across the country.

“I never dreamed that Cartoon Network would animate the anti-bullying story you just saw, and that more than 1 million people would see it,” Nana-Wadieh told the audience before presenting Christina Miller president of Cartoon Network with the inaugural Super Citizen Award. After giving Miller the award, the sixth-grader asked what advice she’d give to him and other students. 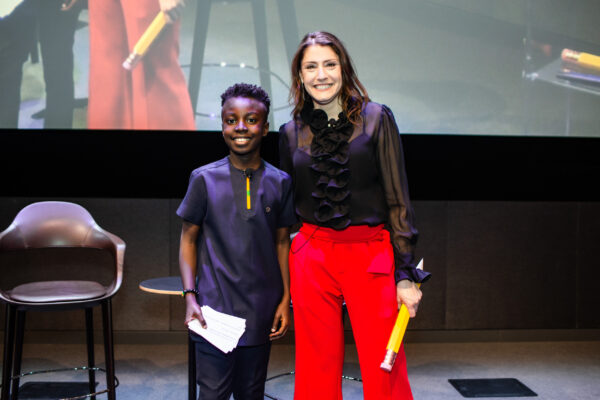 “I would say keep writing. Let your voice be heard — what you’re doing is important, and what 826 is doing is important,” Miller said. “Everyone being able to write and tell stories that interest them inspires others and teaches empathy, and makes people feel special. I would ask you to keep doing it and keep inspiring us all.”

Noemi Martinez, an alumna of 826NYC who is currently a freshman in college, took the stage next to read an excerpt from a fantasy story she’d written in high school. “Through writing at 826NYC, I discovered the incredible power of world-building. So thank you for your generosity and for believing so much in 826, in my voice, and in the voices of my fellow students,” Martinez told the audience. 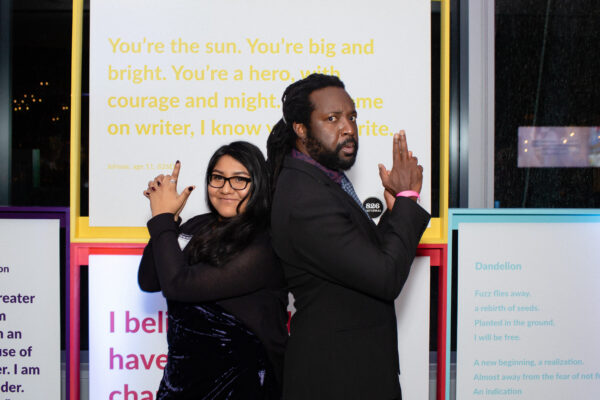 Martinez also presented Marlon James, author and winner of the Man Booker Prize — and a founding board member of the newest 826 chapter, 826 MSP in Minneapolis-St. Paul — with the inaugural Literary Luminary Award, and asked James to share his thoughts about why writing matters.

“Enemies of writing tend to know writing’s power much more than friends of writing,” James told the audience. “When the oppressors come, they burn the books first. I think we need to get to the point where those of us who support writing are going to stand for its power, and people who oppose writing know its power.”

James also explained why he believes in supporting 826. “Because I never stopped being a teacher, and I’ve seen how that moment a student comes across a mind-blowing book, it’s irreplaceable,” he said.

Finally, 826 co-founders Dave Eggers and Nínive Calegari came to the stage. Eggers shared the story of founding 826 back in 2002 in the Mission District of San Francisco. “The place was strange and ridiculous and kids loved it,” he said of the beloved first chapter, 826 Valencia’s Pirate Supply Store. 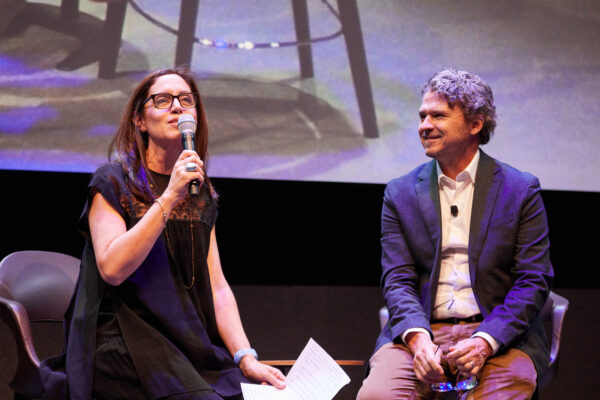 But as much as the group of writers and editors working with Eggers wanted to amplify student voices and publish their words “in beautiful books, magazines, and newspapers,” Eggers said they didn’t know how to navigate the school district, and didn’t fully understand educational pedagogy in the time of No Child Left Behind — which led to Eggers paying a heartfelt tribute to Calegari, his co-founder.

“We needed a partner, a gifted educator that envisioned the ceasing determination and a very high tolerance for pirate humor, to make these goals a reality — Nínive Calegari was that person and we’re all here because of her,” Eggers said. “She synthesized the creative side with the serious education needs and practices and convinced parents, teachers, and even the school district to trust us as a loyal and steady partner. By doing so, she laid the foundation for the entire network.”

Calegari made the crowd laugh recounting how back in 2002, Eggers made her promise to never say nice things about him.

“But this is ridiculous — he says all these nice things about me and I’m supposed to be mute. Don’t you think that’s unfair?” she joked. “Anyway, this is not just one of America’s best writers and a pretty face, he’s also the hardest working man I’ve ever met in my life. So, Dave, I broke my promise.”

Calegari went on to share why she believes 826 is more relevant than ever.

“Teachers are doing more with less every day and 826 is part of the solution, and I’m incredibly proud of that,” Calegari said. “As a life-long educator, I can tell you that all education should include all elements. Tech, hands-on learning, arts, lectures, field trips, and worksheets. Yet the reason I’m so fiercely proud of 826, is that we employ by far the most powerful teaching tool — and it’s listening to [students].” 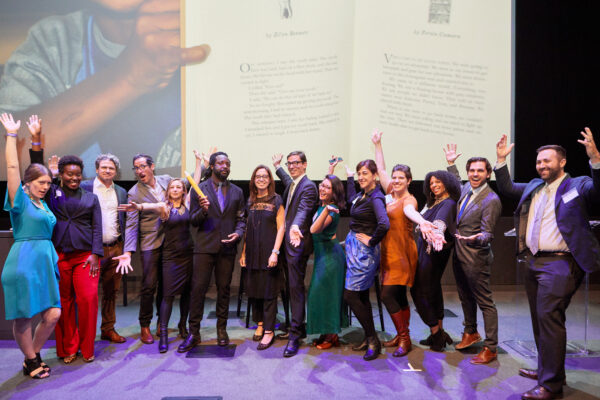 The celebration closed with an acknowledgment of the hard work of the 826 staff, board members, and a thank you to the event’s lead sponsors: AT&T, Warner Media, International Paper, Lynda and Stuart Resnick, and Quinn Emanuel Urquhart & Sullivan LLP. There was also a paddle raise to support the work 826 does with students across the entire 826 Network.

Indeed, 826 has grown from one storefront at 826 Valencia Street in San Francisco into nine chapters nationwide, 826 Digital, and nearly 50 826-inspired organizations worldwide where students can express themselves and find joy and community — and because 826 provides a platform for them to say what they need to say to the world. 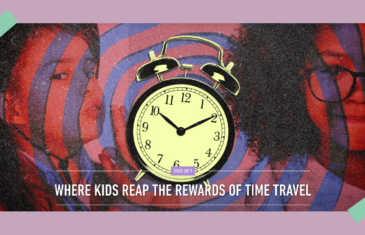 A “curious display of doughnuts” and students writing their futures. That’s what writer Cameron Berger discovered when he paid a visit to 826LA and it’s Echo Park Time Travel Mart.  And as Berger detailed in “Where Kids Reap the Rewards … Continue reading → 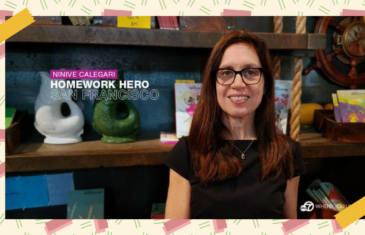 As part of Women’s History Month and “National March into Literacy” month, Nínive Calegari was honored by ABC7 for changing kids’ lives one book at a time. Continue reading → 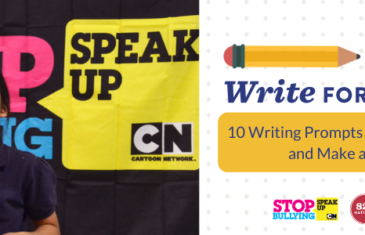 Write for Inclusion with Cartoon Network’s Stop Bullying: Speak Up

“The reason you should accept people the way they are is because everybody is different and people have feelings as soft as feathers.” — Nana-Wadieh, Grade 3, 826NYC October is National Bullying Prevention Month, and we’re excited to partner with … Continue reading →